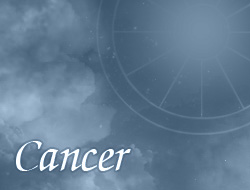 Persons under the sign of Cancer are characterized by a high degree of sensitivity to the world. Every day they observe what's going on in the world and to be honest they experience it. They would want to be peace and happiness on our planet, since then they wouldn’t be afraid of anything.

Cancers have a very sensitive personality; therefore it is necessary to pay attention to spoken word toward them, because you can easily hurt such persons. It regards most of persons, but as for Cancers, their sensitivity is greater. It is possible to state that they take practically every word and treat them seriously. Then they often muse why a given person told them something what hurt or in some way affected them.

Sometimes it may seem that they ignore negative words said in their direction. They try not to catch such words, but when they do, just turn it into a positive words thus feel better and not have to muse why the second person said so. They often lose control over own emotions, sometimes trigger quarrels with the second person or act against own will, since in such situations the mind says something else than emotions.

Very strongly attached to their places of residence, by which is hard for them to leave the family home. If they are already away from home, need a lot of time to adapt in a new place and it is hard for them to fall asleep. In the life they are able to achieve quite a lot of success, often have considerable monetary assets, thus can take care of themselves and loved ones.
Horoscopes for Cancer: